As platform sponsors, IonQ and Microsoft provided one of several challenges teams could enter as part of the hackathon: use Microsoft’s Azure Quantum cloud platform with IonQ’s trapped ion quantum hardware to develop either a game or an important component of a game.

After a late night of happy hacking, and a few hours of sleep, teams pitched their projects to judges from the organizing and sponsoring organizations. Nearly every team presented advanced, clever, and fun solutions to the prompt. We were truly blown away by the creativity, ambition, and intelligence of all of the teams!

But, we had to award first prize to someone, and of the many amazing contenders, the “Opti-maze” project, which uses a competitive game to teach players about the Quantum Approximate Optimization Algorithm (QAOA) and CO2 emissions, took the gold. 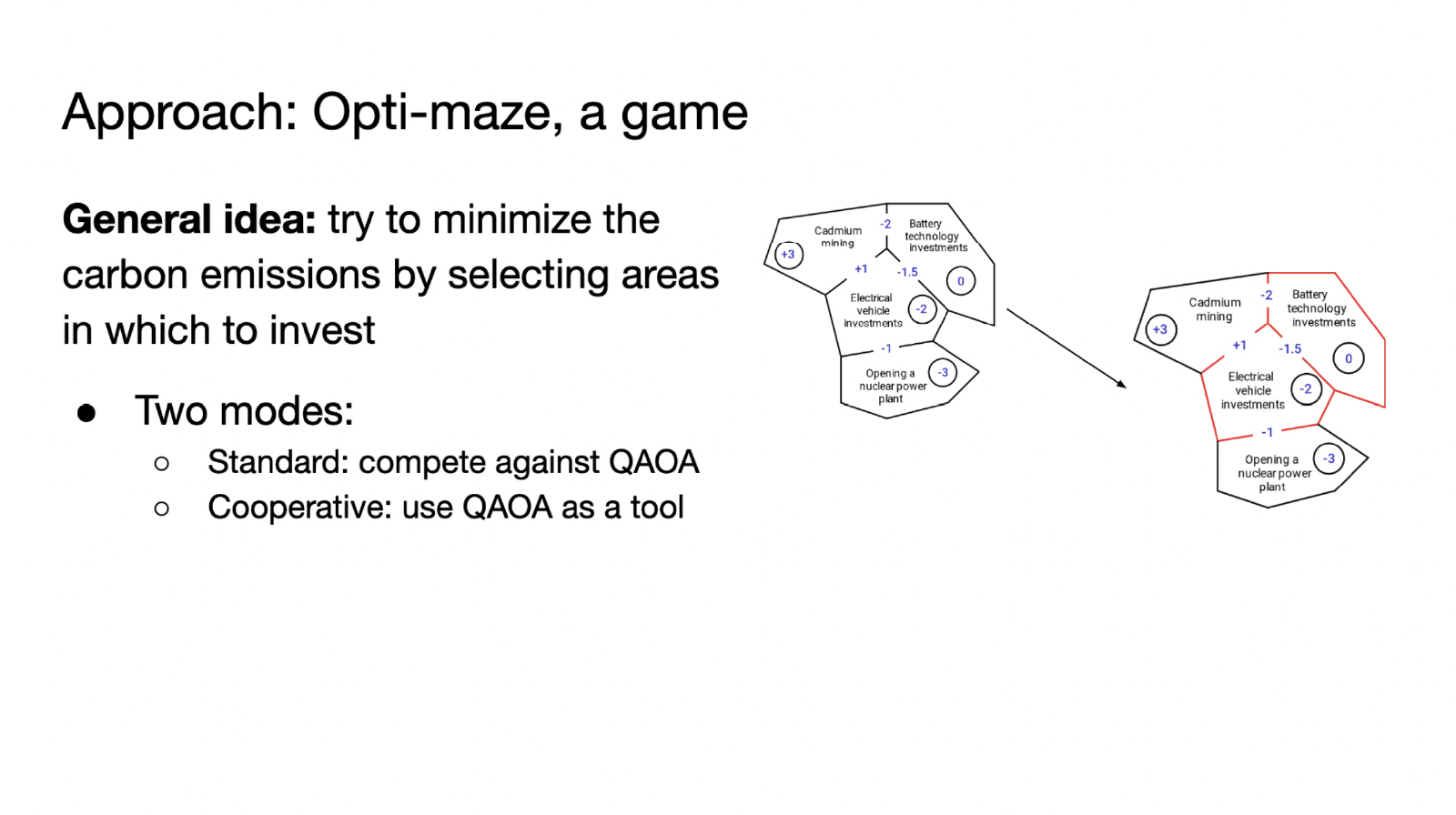 From the Opti-Maze Team’s presentation

“Opti-maze is a game where a player is given a task of optimizing some loss-function... [in an exponentially hard problem] in two possible game regimes,” explained Nikita Astrakhantsev, a PhD student at the University of Zurich, and unofficial leader of the winning team. “In the ‘standard’ regime, the player does not use a quantum computer but rather competes with it. The player iteratively flips binary variables trying to get a result better than the one of the quantum computer.

”In the ‘cooperative’ mode, the player guides the quantum computer rather than competes with it. We assume that the size of the full graph is so big that current quantum hardware can not support such a big number of coherent qubits. The player then selects a subset of these binary variables and asks QAOA to give an answer for this subset... When the QAOA answer for the subset is found, the solution is assigned to this subset and the player can select the next subset. Then, the hope is, that iteratively the solution for a bigger problem would be found.”

Astrakhantsev and his team argue that “a vast majority of real-world optimization problems can be to some accuracy formulated as binary-variable optimization, just like the one we are solving.” To illustrate that, they created an example with functional representation of a problem of investment into technologies to minimize CO2 emissions. 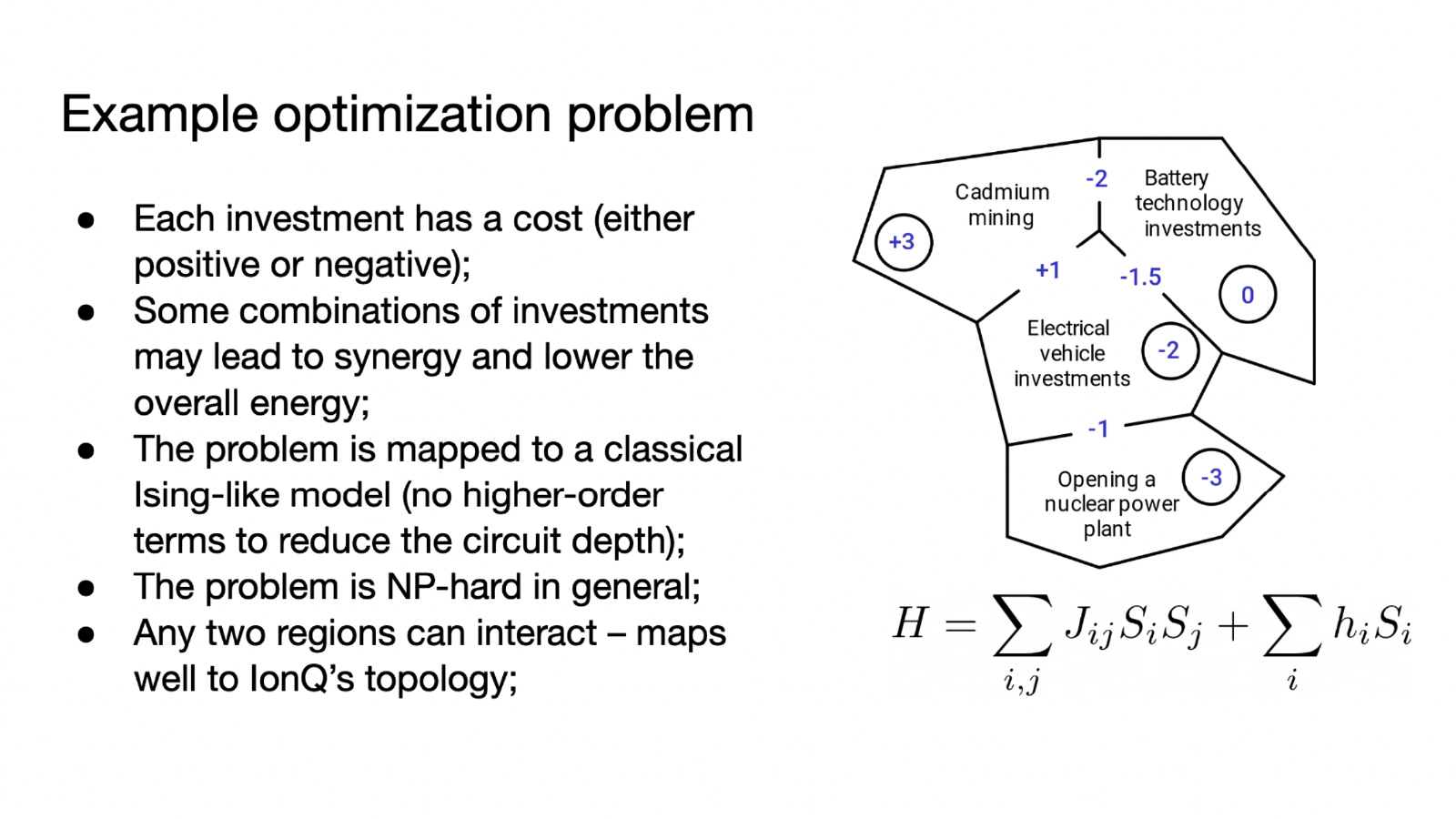 From the Opti-maze Team’s presentation

“The ‘standard’ mode... brings awareness of complexity of optimization problems in the presence of many variables and... illustrates the ability of quantum computing to address these problems. The ‘cooperative’ mode serves to show that even though the current hardware cannot be directly applied to real-world problems yet, with some simplification and approximation one still already can do it.”

Alberto Colombo, a PhD student at The Polytechnic University of Milan, took the team's lead in actually working with IonQ's hardware. Though new to the platform, Colombo was able to make use of it rapidly enough to help secure his team's win.

“...We used the Qiskit/Python setup on the Azure server,” Colombo says. “Starting with it has been pretty straightforward, since in principle it only required that we substitute IBM credentials with Microsoft ones and to set up the right IonQ backend. This has been a major benefit since we had no experience with Q# or similar languages and being able to code in Python has been incredibly useful especially given our time constraint.

“In the end, we had a tiny exposure to the real hardware, partially due to the choice of using a moderately expansive routine as QAOA, whose optimization step requires multiple evaluation alternated by classical gradient descent. Despite this fact, we had a lot of fun and excitement in using a novel quantum technology as trapped ions (we only had previous exposure with superconducting QPUs) and we look forward to exploiting it more in the future.”

Three members of the team just happened to all be visiting a campus of the Technical University of Munich during the hackathon. Once they realized this, they were able to meet in person, strengthening the team’s cohesion. Reinis Irmejs and Vasilii Bokov, both masters students at the Max Planck Institute for Quantum Optics, and Tom Westerhout, a PhD student at Radbound University, completed the team.

“Tom Westerhout is a born scientific computing software engineer and he built the game’s skeleton,” Astrakhantsev recalled. “We, with Alberto, worked on the hardware and implementation of the QAOA algorithm. Reinis prepared the presentation and tailored the CO2 emissions reduction example, while Vasilii worked a lot on the repository and the manuscript explaining our work. It was a pleasure for me to work with them.”

When asked if he planned to continue working in quantum, Astrakhantsev explained that he has worked mostly with classical computing in the past but sees himself moving further into a quantum direction. He is already working on his next quantum project, an implementation of VQE (variational quantum eigensolver, a type of hybrid quantum/classical algorithm).

He would like his career to include quantum computing after completing his PhD. “Either in academia as a postdoc or in a company as a researcher,” Astrakhantsev says, “I feel like this field has a lot in it in terms of fundamental science, mathematics and use for industry and technology.”