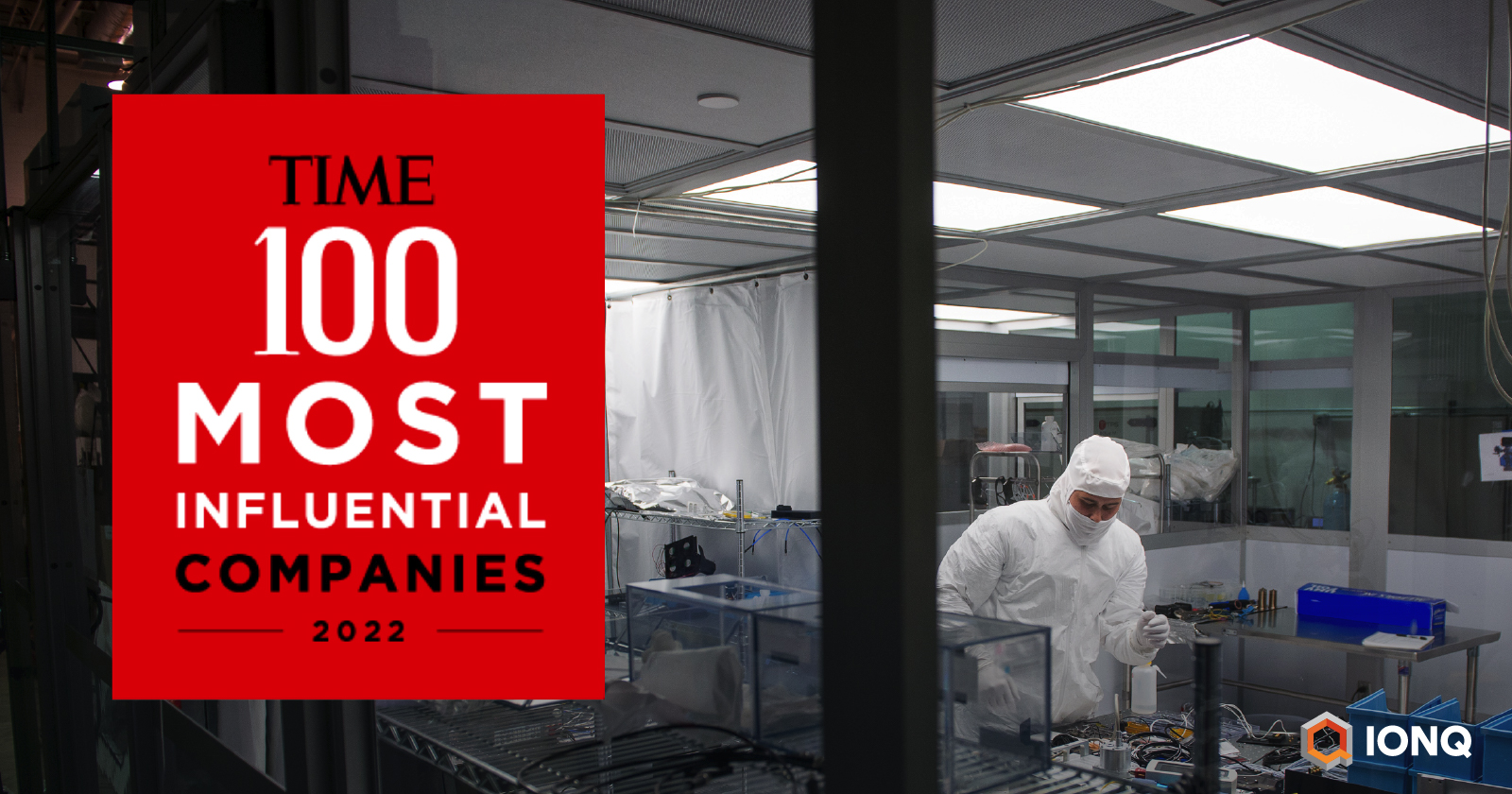 TIME describes the 2022 list of the TIME100 Most Influential Companies as “businesses helping chart an essential path forward.” They evaluated candidate companies based on key factors such as relevance, impact, innovation, leadership, ambition and success.

We earned our place on the TIME100 by making quantum computing–something that may seem like the distant future–a reality today. A look back at our accomplishments demonstrates our impact in the quantum computing landscape. We launched IonQ Aria, which we believe to be the world’s best quantum computer with an industry-leading #AQ of 20. It will be available on Microsoft’s Azure Quantum cloud service and select partners are already using it in private beta.

We announced a partnership with Hyundai to use our quantum hardware and expertise to develop better batteries for electric vehicles. We began a collaboration with Oak Ridge National Laboratory in a separate effort to research metal hydrides, which can also enable development of batteries and hydrogen storage for hydrogen powered vehicles.

Major financial services companies and IT providers are working with us to do things like model stock pricing and detect early warnings of black swan events in financial markets. We’ve also been working with GE Research to explore the potential impact of quantum computing on risk analysis using Monte Carlo simulations.

Our hardware has advanced significantly during the past year. We made a decision to start working with a new type of atom—barium— in our ion traps, complimenting the ytterbium ions that our current systems use. The new barium approach is already providing us with an industry-leading 99.96 fidelity in state detection. We secured a permanent source of barium ions for future systems in partnership with the US Department of Energy’s Pacific Northwest National Laboratory. IonQ Aria uses yet another ion trap which we produced in-house, designed specifically for high performance in IonQ quantum computers.

IonQ’s scientists also collaborated with the Duke Quantum Center at Duke University to invent a new family of quantum gates which is expected to enable more efficient quantum algorithms that do more with less qubits. These gates can only run on our trapped ion computers.

Looking ahead, we are following a roadmap that drives towards quantum computers that can solve problems which no classical computer could ever handle.

One key element in our roadmap is networking multiple quantum computers together to make much more powerful systems. Back in 2007, IonQ co-founders Chris Monroe and Jungsang Kim outlined a method of networking two ion trap systems together. Connected with fiber optics, the all-to-all connectivity of our qubits within individual traps can extend to interconnectivity between many ions across multiple traps. This is a key part of our path to increasing overall physical qubits in our quantum computers.

Another key element is low-overhead error correction. IonQ is part of the first team in the world to show error correction in practice, which is a key step in achieving scalable quantum computers. Importantly, our error correction overhead (the number of qubits required to reduce error) in this experiment was 13:1, whereas conventional wisdom has held that error-corrected qubits would require thousands, or perhaps millions, of physical qubits. Networking multiple systems together can get us to the higher (but not astronomically higher) number of physical qubits necessary to start making error correction a reality.

We are honored to be included among the TIME100 Most Influential Companies in the 99th year of the publication’s history. We've already become one of the world's most influential companies, and we believe that we are just getting started. The 21st century is going to be powered by quantum computers, and IonQ is going to lead the effort to build, program, and commercialize this revolutionary technology.