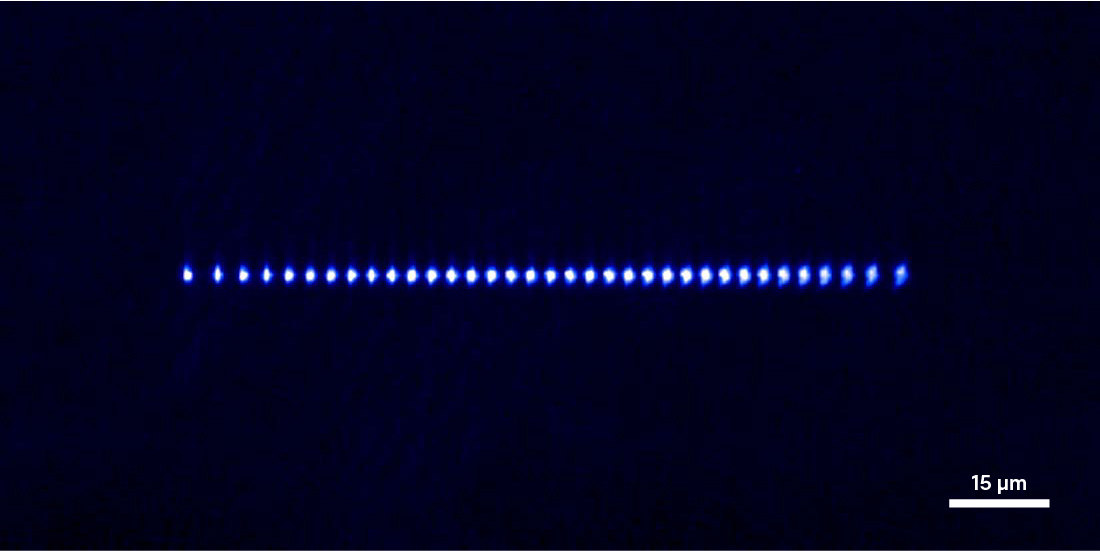 Today, IonQ (NYSE: IONQ) and the U.S. Department of Energy’s Pacific Northwest National Laboratory (PNNL) announced that their innovative public-private partnership has generated a sustainable and robust source of barium qubits for IonQ’s next generation quantum computers. IonQ believes that this collaboration will supply barium qubits for its quantum computers in perpetuity, a key step as the company begins to scale its manufacturing operations.

In addition to creating a pipeline of ions to power IonQ’s computers, over the course of two years the IonQ and PNNL teams were able to shrink the barium source material down to a microscopic scale. IonQ believes this is significant because it will allow IonQ to reduce the size of core system components, an important step in the creation of quantum computers small enough to be networked together.

“IonQ’s work with PNNL to secure the domestic supply chain of IonQ’s quantum computing qubits is a fundamental step in the mass commercialization of quantum computing,” said Peter Chapman, President and CEO of IonQ. “Qubits are at the core of our quantum computers, and this collaboration with PNNL lays the foundation for us to scale manufacturing of our systems.”

The resulting qubits from the partnership are already being used in IonQ’s barium-based quantum computer , which is intended to be even faster, more powerful, and more easily connected than IonQ’s current commercial systems.

IonQ’s partnership with PNNL builds on the company’s existing partnerships with the U.S. government. In November, IonQ became the first pure-play quantum computing manufacturer to join the Northwest Quantum Nexus (NQN) , along with Microsoft, the University of Washington (UW) and PNNL. This past September, IonQ announced another government partnership to build the first-of-its-kind National Quantum Lab (Q-Lab) at the University of Maryland. In addition, IonQ’s Co-Founder and Chief Scientist, Professor Christopher Monroe, serves on the National Quantum Initiative Advisory Committee (NQIAC).

“We are thrilled to contribute PNNL’s chemistry expertise to the quantum computing community,” said Marvin Warner, a PNNL materials scientist. “It is particularly satisfying to collaborate on what will become the core components of IonQ’s systems.”

Today’s partnership with PNNL is one of several ongoing IonQ initiatives aimed at expanding quantum computing manufacturing within the Pacific Northwest. IonQ is actively expanding its headcount in the region with key leadership hires , and will soon settle on a location for its Seattle-based product engineering facility.

Pacific Northwest National Laboratory draws on its distinguishing strengths in chemistry, Earth sciences, biology and data science to advance scientific knowledge and address challenges in sustainable energy and national security. Founded in 1965, PNNL is operated by Battelle for the U.S. Department of Energy’s Office of Science, which is the single largest supporter of basic research in the physical sciences in the United States. DOE’s Office of Science is working to address some of the most pressing challenges of our time. For more information, visit https://energy.gov/science. For more information on PNNL, visit PNNL's News Center. Follow us on Twitter , Facebook, LinkedIn and Instagram.

This press release contains certain forward-looking statements within the meaning of Section 27A of the Securities Act of 1933, as amended, and Section 21E of the Securities Exchange Act of 1934, as amended. Some of the forward-looking statements can be identified by the use of forward-looking words. Statements that are not historical in nature, including the words “anticipate,” “expect,” “suggests,” “plan,” “believe,” “intend,” “estimates,” “targets,” “projects,” “should,” “could,” “would,” “may,” “will,” “forecast” and other similar expressions are intended to identify forward-looking statements. These statements include those related to the public-private partnership with PNNL, including expectations that this partnership will be able to supply qubits for IonQ’s quantum computers in perpetuity and the benefits related to shrinking the barium source material down to a microscopic scale; IonQ’s plans with respect to its barium-based quantum computer; IonQ’s ability to further develop and advance its quantum computers and achieve scale; IonQ’s market opportunity and anticipated growth, including potential expansion into the Pacific Northwest; and the commercial benefits to customers of using quantum computing solutions. Forward-looking statements are predictions, projections and other statements about future events that are based on current expectations and assumptions and, as a result, are subject to risks and uncertainties. Many factors could cause actual future events to differ materially from the forward-looking statements in this press release, including but not limited to: market adoption of quantum computing solutions and IonQ’s products, services and solutions; the ability of IonQ to protect its intellectual property; changes in the competitive industries in which IonQ operates; changes in laws and regulations affecting IonQ’s business; IonQ’s ability to implement its business plans, forecasts and other expectations, and identify and realize additional partnerships and opportunities; and the risk of downturns in the market and the technology industry including, but not limited to, as a result of the COVID-19 pandemic. The foregoing list of factors is not exhaustive. You should carefully consider the foregoing factors and the other risks and uncertainties described in the “Risk Factors” section of IonQ’s Quarterly Report on Form 10-Q for the quarter ended September 30, 2021 and other documents filed by IonQ from time to time with the Securities and Exchange Commission. These filings identify and address other important risks and uncertainties that could cause actual events and results to differ materially from those contained in the forward-looking statements. Forward-looking statements speak only as of the date they are made. Readers are cautioned not to put undue reliance on forward-looking statements, and IonQ assumes no obligation and does not intend to update or revise these forward-looking statements, whether as a result of new information, future events, or otherwise. IonQ does not give any assurance that it will achieve its expectations.