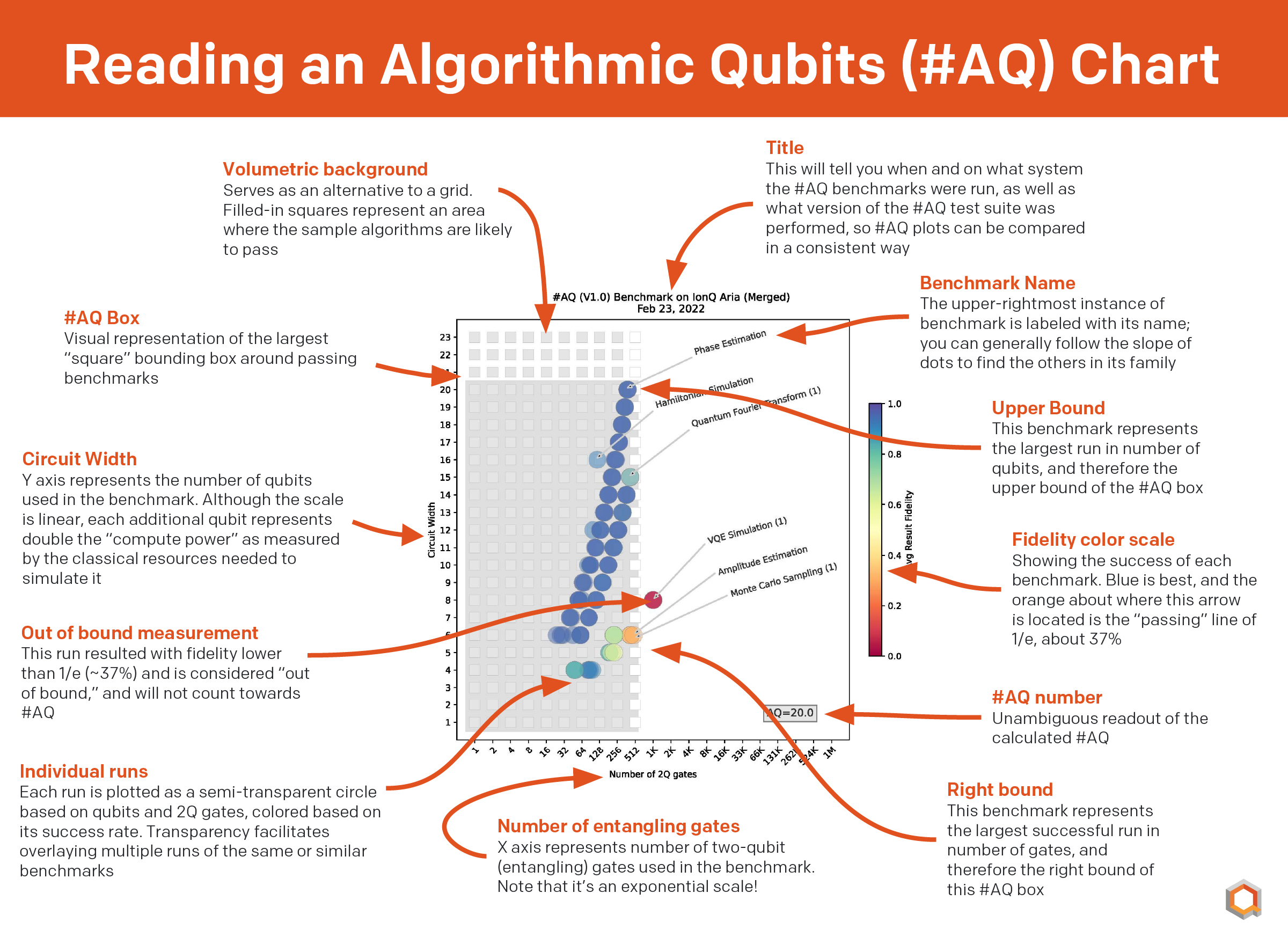 This is a text description of the infographic in this post. The plot shows a series of colored dots, outlined with a gray box. The dots are primarily blue inside the box, fading to yellow, orange and red as they reach the edges. What follows is a list of the labels excplaining different aspects of the plot.
Volumetric background: serves as an alternative to a grid. Filled-in squares represent an area where the sample algorithms are likely to pass.
Title: This will tell you when and on what system the #AQ benchmarks were run, as well as what version of the #AQ test suite was performed, so #AQ plots can be compared in a consistent way.
Benchmark Name: The upper-rightmost instance of benchmark is labeled with its name; you can generally follow the slope of dots to find the others in its family.
AQ Box: Visual representation of the largest “square” bounding box around passing benchmarks Upper Bound This benchmark represents the largest run in number of qubits, and therefore the upper bound of the #AQ box.
Circuit Width: Y axis represents the number of qubits used in the benchmark. Although the scale is linear, each additional qubit represents double the “compute power” as measured by the classical resources needed to simulate it.
Fidelity: color scale Showing the success of each benchmark. Starting with blue and cycling through a rainbow of green, yellow, orange, and red in a linear color scale. Blue is best, and the orange about where this arrow is located is the “passing” line of 1/e, about 37% Out of bound measurement This run resulted with fidelity lower than 1/e (~37%) and is considered “out of bound,” and will not count towards #AQ
#AQ number: Unambiguous readout of the calculated #AQ. this plot reads 20
Individual runs: Each run is plotted as a semi-transparent circle based on qubits and 2Q gates, colored based on its success rate. Transparency facilitates overlaying multiple runs of the same or similar benchmarks
Right bound: This benchmark represents the largest successful run in number of gates, and therefore the right bound of this #AQ box Number of entangling gates X axis represents number of two-qubit (entangling) gates used in the benchmark. Note that it’s an exponential scale!

Algorithmic Qubits (#AQ) is a tool for showing how useful a quantum computer is at solving real problems for customers, by summarizing its ability to run select benchmark quantum algorithms most often used for applications. The single-number score provides a quick way for a broad spectrum of customers and users to compare systems, and represents IonQ's point of view on how the quantum industry should express the capabilities of near-term hardware.

A full #AQ run comes with a graphic, adapted from the visual representation of the QED-C benchmarks that go into #AQ, showing every run of these benchmarks that went into calculating it. For those who want to dig a little bit deeper into the details of this representation, we’ve prepared a graphic to help understand what it says and how to read it.

For more on #AQ, you can read our full #AQ blog post outlining the motivation behind the standard, the specific rules used to calculate it, and the results for our latest system, IonQ Aria.