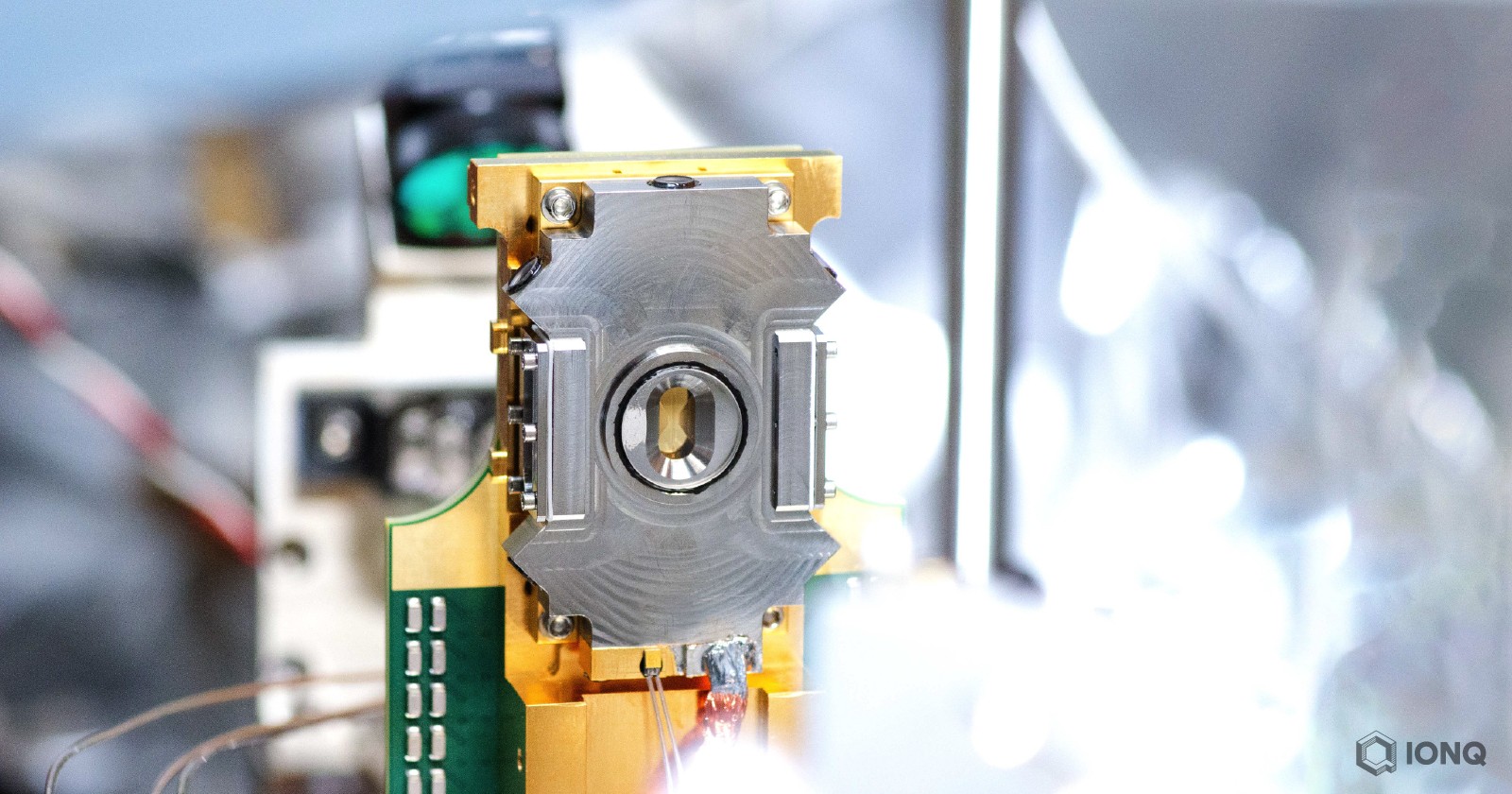 IonQ is a customer-focused quantum hardware and software company. As we are constantly advancing the state of the art of this groundbreaking technology, our guiding light is the quantum computing's utility—what this technology can do, for who, and how accurate its results are.

We care about not just qubit count, but qubit performance, and making it easy for users to take advantage of them to help shape the future. When we innovate and invent, we are focused on creating useful systems that can solve real problems for real users, whether they’re a postdoc in a lab or an ambitious executive at a financial services firm.

This philosophy is apparent in IonQ Aria, our 5th generation system and the world’s most powerful quantum computer at launch. IonQ Aria is our first quantum computer built specifically for use by our customers.

By demonstrating an Algorithmic Qubit count (#AQ) of 20, the largest #AQ number measured and reported in any quantum system, IonQ Aria has shown itself to be the best and most useful quantum computer on the market at the time of this writing.

While many other metrics matter—and we’ll share all of them later in this post— Algorithmic Qubits are the best and easiest way to determine a quantum computer’s ability to perform real-world applications. #AQ is a summary metric that describes the number of qubits in a quantum computer that can be successfully used to run a variety of application-oriented performance benchmarks developed by the Quantum Economic Development Consortium (QED-C). The #AQ suite of benchmarks include algorithms like the Quantum Fourier Transform used in factoring and hidden subgroup problems, Hamiltonian Simulations used in quantum chemistry and materials science, Monte Carlo Sampling, used in quantum finance applications, and others. The full list can be found here.

These applications are more effective in predicting the real-world usefulness of quantum computers to solve real problems than other benchmarking techniques. This goes back to our obsession with utility for customers—we measure power not in raw qubits or arbitrary speed measurements, but in useful outcomes.

In practice, an #AQ of 20 means that IonQ Aria can successfully execute a quantum circuit over 20 qubits that contain about 400 entangling gate operations. This makes the system several thousand times more powerful than IonQ Harmony, our previous hardware generation.

#AQ encompasses a system’s relative success at running these algorithms into a single number that translates total qubits into useful ones. It doesn’t matter if a given quantum computer claims 10 qubits, 100, or 1,000, #AQ is about getting useful things done with these qubits. 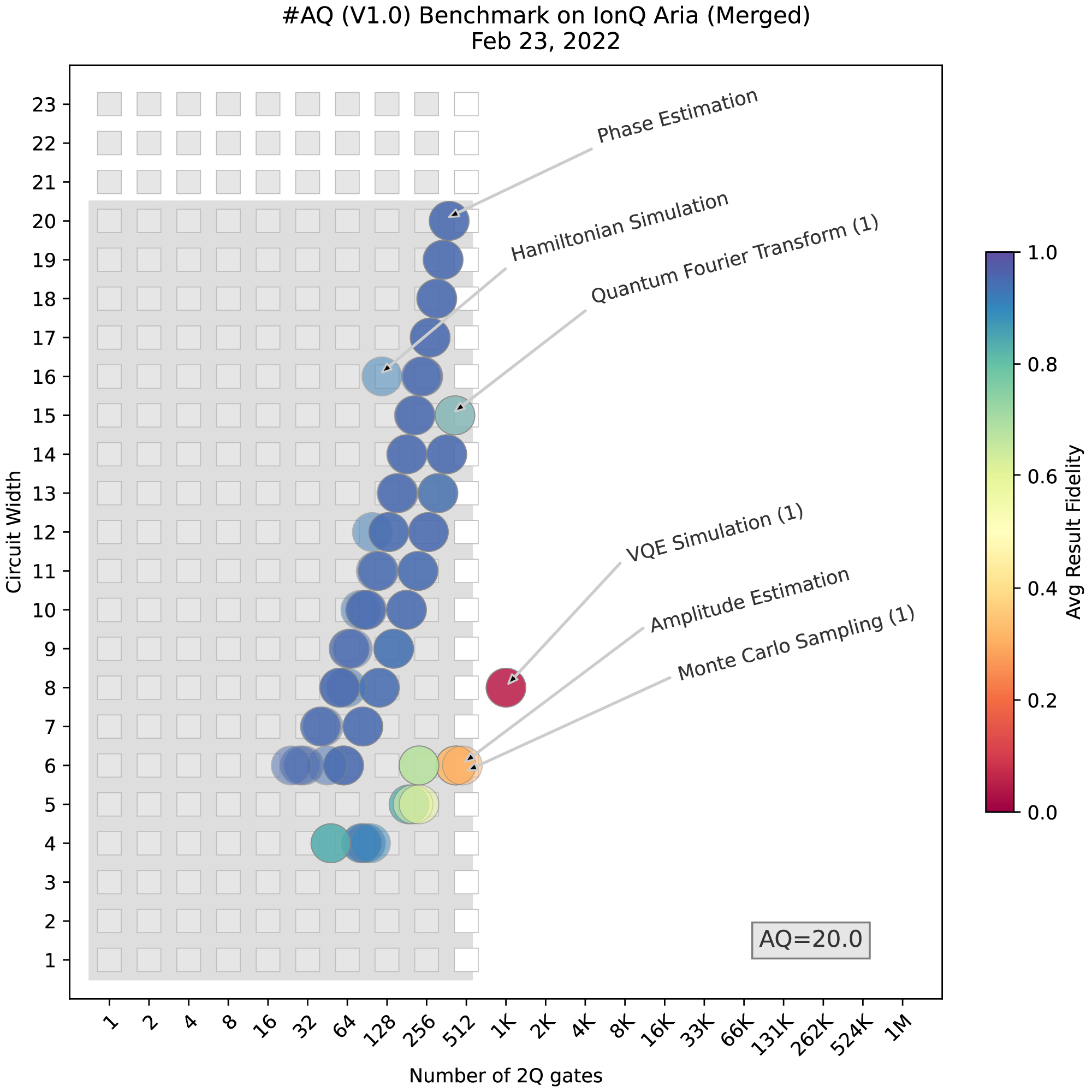 Aria by The Numbers

IonQ Aria’s lower-level metrics are just as impressive as its Algorithmic Qubit count.

With an #AQ of 20, IonQ Aria is currently the best publicly-disclosed quantum computer in the world. Its trapped-ion architecture offers all-to-all connectivity among the 21 physical qubits in its current production configuration, producing an average single-qubit gate error rate of 0.05% with a single qubit gate speed of 135μs. Its an average two-qubit error rate of 0.4% at a gate speed of 600μs. The average error rate for state preparation and measurement is a mere 0.5%. The lifetime of its qubits (T2 Time) is around 1000ms.


We have focused on maximizing the #AQ, which means focusing on a high number of performant qubits, not just a high number of qubits overall. As such, we are currently offering it with a production configuration of 21 physical qubits, over which high fidelity gate solutions were developed. It is possible that we may find ways of improving performance and qubit count as we continue to learn more about this system, and qubit cougnts and #AQ score could further increase.

For more detail on why these system specifications are important to understanding the performance of a quantum system, see our recent article laying out what we believe should be the standard information disclosed about a quantum computer offered for commercial use. 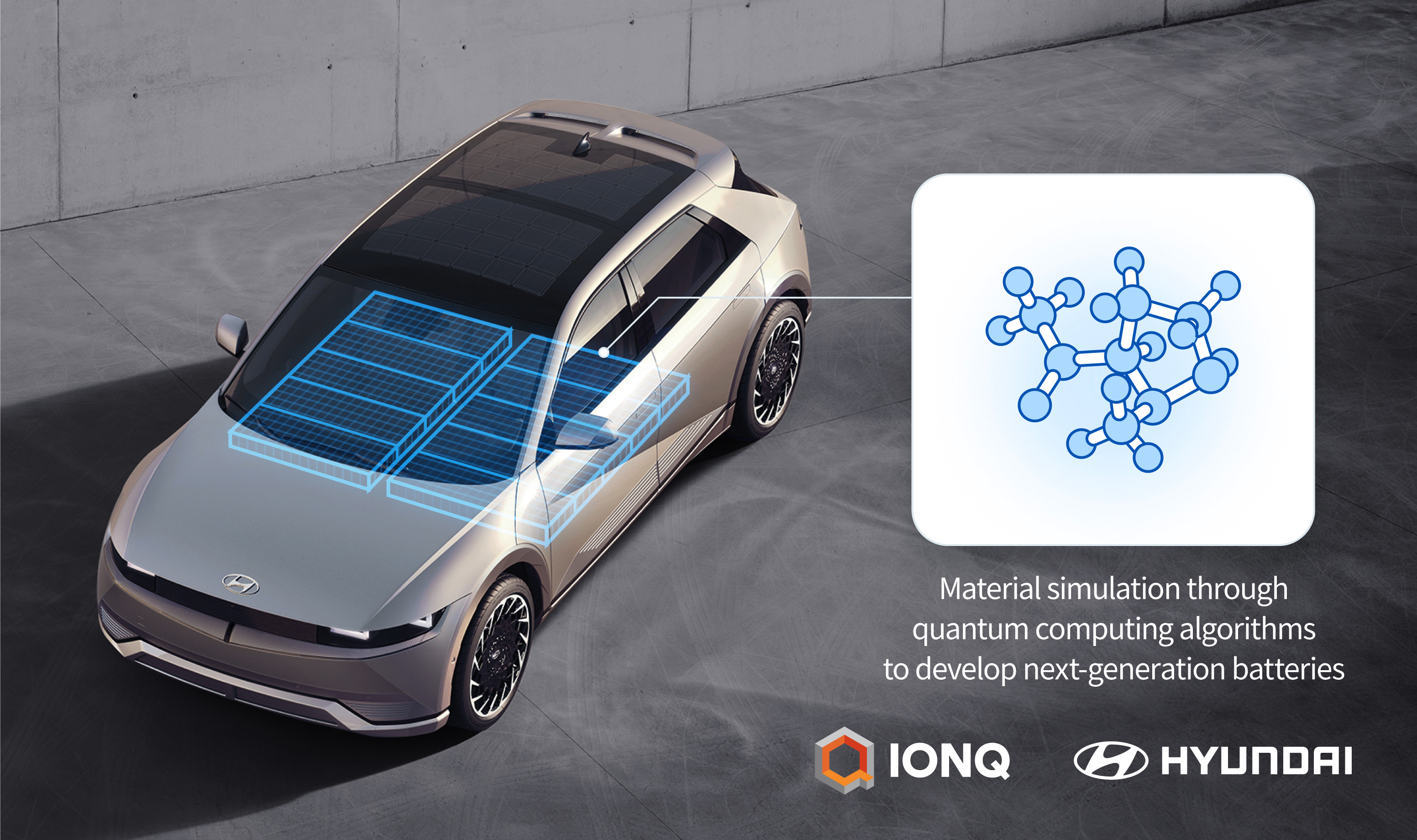 IonQ Aria in Use

Select early access customers have already begun using the system to solve problems with applications in finance, chemistry, machine learning, and more, with additional customers beginning to run jobs on the leading hardware as we onboard new customers onto Aria’s Expanded Beta. For example, in partnership with Hyundai, we have started a project to accelerate research into battery development for electric vehicles, starting by modeling lithium oxide molecules.

Designing better batteries means optimizing the structure of molecules and the relationships between them in order to accomplish goals like greater energy storage, slower discharge rates, and lower risk of starting a fire. The old way of doing this was with lossy computational heuristics, or even to physically synthesize molecules and experiment with them in a lab to see how they perform. Exploration of new molecules for cathodes, electrolytes, and more can be sped up by simulating them on computers to see what happens when changes are made.

Quantum computers are inherently better than classical computers at simulating quantum behaviors. This was part of the original impetus behind the theoretical development of quantum computing, starting with Richard Feynman’s 1981 speech, “Simulating Physics with Computers.”

IonQ Aria will run hybrid quantum algorithms like the Variational Quantum Eigensolver to find the ground state properties of lithium oxide, which improves our understanding of chemical reactions from the atomic level. This approach, if simulated on classical computers, will scale exponentially with the size of systems. Simulating a single molecule of caffeine on classical hardware would require that computer to be larger than the Moon.

We have previously used an earlier generation of our quantum computers to model the water molecule as a proof-of-concept. The IonQ Applications Team has worked to optimize molecular simulations on our hardware, helping to put together a tool chest for facilitating research on more complex molecules.

Water is a very simple molecule, with a total of only 10 electrons among three nuclei. So using IonQ Aria to scale up to modeling lithium oxide is a significant step – lithium oxide’s three atoms have 14 total electrons and a significantly larger Hilbert space that one needs to search in order to solve its ground state.

We’ve also used IonQ Aria to explore problems in Finance, one of the most promising application areas for quantum computing. Managers of assets optimize their portfolios based on intense computational models that process huge sets of variables. Processing such large configuration spaces is something that quantum computers are expected to efficiently exploit, and that has been borne out as our computers have scaled up.

We have collaborated with GE Research to use IonQ Aria to model certain joint distributions of The Dow Jones Total Stock Market Index, The Market Volatility Index, and The Nikkei Market Index, demonstrating a promising way to perform multivariable analysis faster and more accurately.

IonQ has previously partnered with a major financial services organization on similar research on stock prices. This work has used hybrid quantum computing to enable machine learning. Working together, a classical computer and one of IonQ’s quantum computers learn to generate high-quality synthetic sets of data to accurately account for black swan events in stock performance.

This technique does not limit its applications to finance, though. The same approach may be capable of providing insights in many fields where many related variables have to be weighed in concert, including product manufacturing, factory operations, and supply chain management.

Aria’s higher #AQ is allowing this work to be completed much faster than would have been possible using our previous generation of quantum computers. We look forward to seeing what else is possible on this, and future generations of IonQ quantum hardware.

Come back next week for part two, where we’ll cover IonQ Aria’s place in IonQ history, its unique architectural advantages, and more.