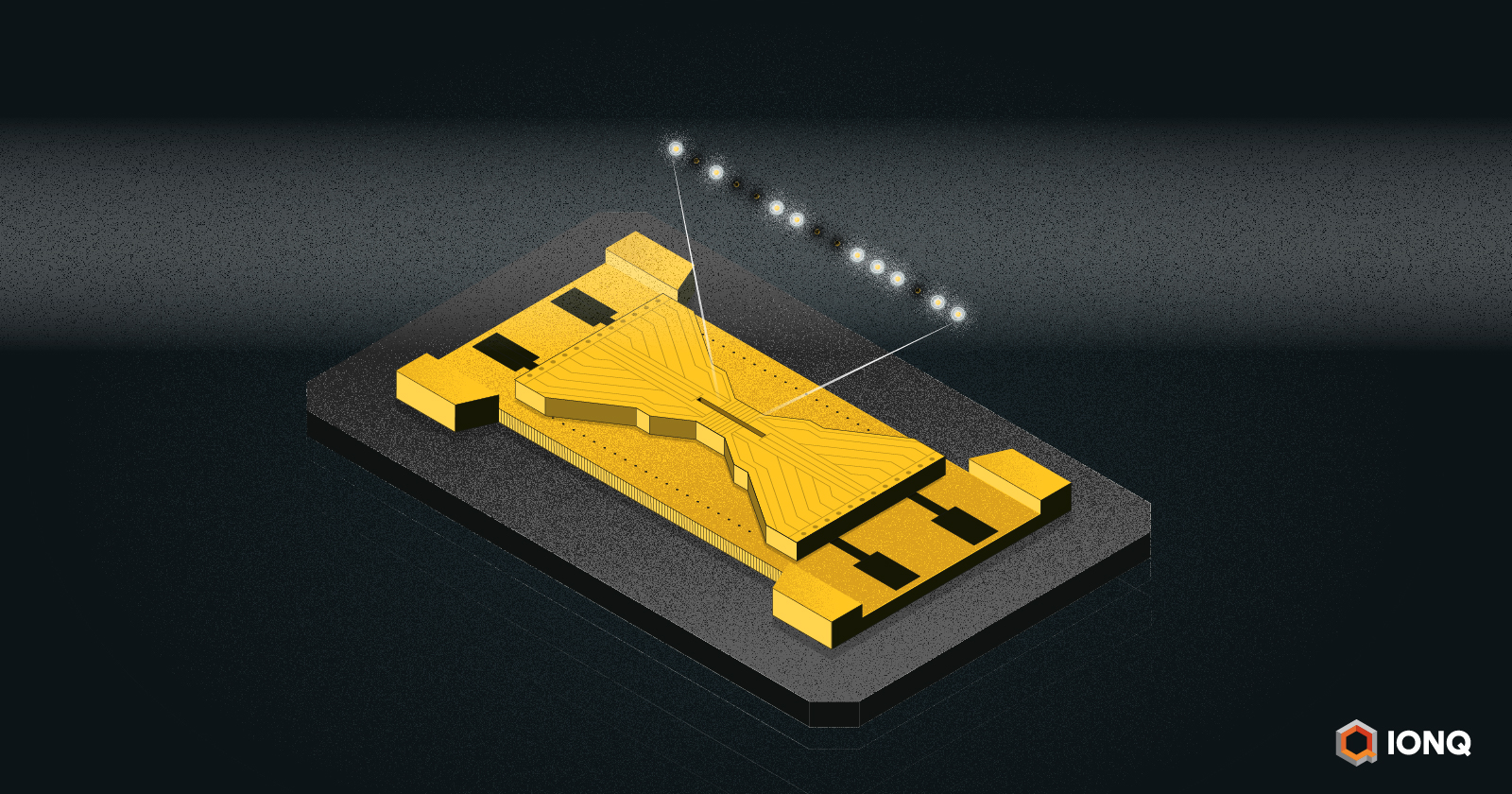 Illustration of qubit readout in an IonQ system — to read the state of ion qubits, the system shines a specially-tuned laser on the qubits, and then measures the light emitted.

IonQ (NYSE: IONQ), a leader in quantum computing, today published results from its new barium-based quantum computer showing its superior state detection fidelity. The results reflect a 13x reduction in state preparation and measurement (SPAM) errors, a metric core to producing accurate and reliable quantum computers. On a per-qubit basis, IonQ has reduced these errors from 50 errors per 10,000 computations down to only 4 per 10,000 computations. In other words, IonQ’s barium qubits have brought the company from a 99.5% state detection fidelity up to an industry-leading 99.96%.

The accuracy of computing results is key for the continued adoption of quantum computing in industries ranging from finance to chemistry. Quantum computers experience errors in three ways: imperfect state preparation at the beginning of an algorithm; imperfect quantum logic gates while running said algorithm; or imperfect measurement in reading out results. For quantum computers to scale while maintaining accuracy, all three sources of error must be mitigated. State detection errors grow with every qubit added, meaning that as systems scale, improved state detection fidelity is increasingly critical for the computer to deliver accurate results to a user. Even assuming flawless quantum logic gates, an average SPAM fidelity of 99% would limit a system’s #AQ to around 100; with a SPAM fidelity of 99.96%, it would require roughly 2000 qubits before SPAM became the limiting factor.

“We have already proven that trapped ions yield more algorithmic qubits than any other quantum computer architecture,” said Professor Jungsang Kim, co-founder and Chief Technology Officer of IonQ. “Today’s announcement demonstrates that our new barium qubits are already paving the way for increased fidelity, adding state detection error reduction as another area where IonQ is clearly leading the field.”

In December, IonQ announced its plan to use barium ions as qubits in its systems, bringing about a wave of advantages it believes will enable advanced quantum computing architectures. The proposed benefits included “lower error rates, higher gate fidelity, and better state detection.” Today’s milestone reaffirms IonQ’s belief that use of barium would lead to better state detection and fewer errors and further validates IonQ’s expansion of its qubit arsenal to include barium.

Last month, IonQ announced a public-private partnership with Pacific Northwest National Lab (PNNL) that created a sustainable, perpetual source of barium qubits to power these systems, securing the supply chain for future barium systems. IonQ also unveiled performance results for IonQ Aria, the Company’s latest generation quantum computer, which, with 20 algorithmic qubits, is the industry’s most powerful quantum computer based on standard application-oriented industry benchmarks. The IonQ team anticipates that the transition to barium will only further that lead in future systems.

This press release contains certain forward-looking statements within the meaning of Section 27A of the Securities Act of 1933, as amended, and Section 21E of the Securities Exchange Act of 1934, as amended. Some of the forward-looking statements can be identified by the use of forward-looking words. Statements that are not historical in nature, including the words “anticipate,” “expect,” “suggests,” “plan,” “believe,” “intend,” “estimates,” “targets,” “projects,” “should,” “could,” “would,” “may,” “will,” “forecast” and other similar expressions are intended to identify forward-looking statements. These statements include those related to the results from its new barium-based quantum computer; IonQ’s commercial lead in the area of state detection error reduction; the public-private partnership with PNNL, including expectations that this partnership will be able to supply qubits for IonQ’s quantum computers in perpetuity; IonQ’s plans with respect to its barium-based quantum computer, including improvements in the algorithmic qubit (#AQ) capacity; IonQ’s ability to further develop and advance its quantum computers and achieve scale; IonQ’s market opportunity and anticipated growth; and the commercial benefits to customers of using quantum computing solutions. Forward-looking statements are predictions, projections and other statements about future events that are based on current expectations and assumptions and, as a result, are subject to risks and uncertainties. Many factors could cause actual future events to differ materially from the forward-looking statements in this press release, including but not limited to: market adoption of quantum computing solutions and IonQ’s products, services and solutions; the ability of IonQ to protect its intellectual property; changes in the competitive industries in which IonQ operates; changes in laws and regulations affecting IonQ’s business; IonQ’s ability to implement its business plans, forecasts and other expectations, and identify and realize additional partnerships and opportunities; and the risk of downturns in the market and the technology industry including, but not limited to, as a result of the COVID-19 pandemic and geopolitical tensions, such as Russia’s recent incursion into Ukraine. The foregoing list of factors is not exhaustive. You should carefully consider the foregoing factors and the other risks and uncertainties described in the “Risk Factors” section of IonQ’s Quarterly Report on Form 10-Q for the quarter ended September 30, 2021 and other documents filed by IonQ from time to time with the Securities and Exchange Commission. These filings identify and address other important risks and uncertainties that could cause actual events and results to differ materially from those contained in the forward-looking statements. Forward-looking statements speak only as of the date they are made. Readers are cautioned not to put undue reliance on forward-looking statements, and IonQ assumes no obligation and does not intend to update or revise these forward-looking statements, whether as a result of new information, future events, or otherwise. IonQ does not give any assurance that it will achieve its expectations.